There has been a bit of water under my keel since my last correspondance. I hope this fills the gap.

After the Galapagos we made a quick trip across to Manzanillo, Mexico. It was an opportunity to change out some crew and get some fuel. I was dragged off the boat protesting for a dinner with a few crew. The restaurant was nice, the tequila afterwards not so nice. Conveniently there was a roadside fiesta that waylaid us on our way back home. Mexicans seem to be quite fond of fiestas. The Mexicans in Manzanillo seem to be quite fond of LED light strips underneath cars as well. We departed for Vancouver the very next day.

It was a long voyage north hugging the coast of North America. We had very large seas but it was relatively comfortable. I did not go outside at all. Nobody jumped over board. Our head Chef lightened things up by throwing increasingly dangerous amounts of chillies he sourced in Manzanillo into every dish. There was no escaping the chillies  I did enjoy his spicy carbonora, spicy pesto gnocchi and spicy pumpkin soup.

I have to say the final cruise into Vancouver was astoundingly beautiful. Vancouver is a very pretty and very accommodating city. Our ship is berthed on the north shore which is a short ferry ride into the City. After ten days at sea we made a quick trip to the local pub. The Rusy Gull was chosen for one reason only. Its distance. The commercial seaman on board were disappointed with its cleanliness, full heads of teeth and lack of immediate danger. I was quite amused to find Steinlager on the menu and Australian rules football on the television. It was Anzac day. 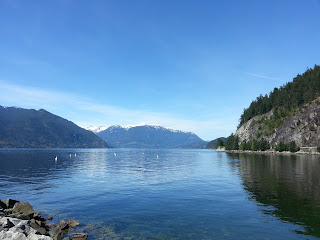 My rotation partner decided not to come back to work. Being Canadian I thought he would have lept at the chance to work in his own country. He did not. This was a bit frightening as I was due to go home on the 12 of May. It turns out AVIT's are a rare breed. Luckily our Chief Engineer is a rarer breed and found a stirling candidate who needed to be evacuated from the Middle East. Sound familiar? It should because it is exactly how they found me.

With a replacement found I did begin to breathe a bit easier and threw myself into experiencing Vancouver. On a sparkling sunday I caught the Seabus into town. I then rode the sky train to the middle of somewhere called Broadway and cantered about experiencing suburbia in Canada. My experience was middling in that I did not end up where I wanted to be. When I got back to downtown Vancouver I was taken by the sim city like precision which has left the Commerical district missing all street level retail. Clearly my dead reckoning was a bit out.

The following Saturday was a bit special as Armin Van Buuren played at the convention centre. Way back in 2010 my Wife and I got to see Armin trott out his new album Mirage for the first time. The universe provided me with the opportunity to see Armin play his new album for the second time. We couldn't not move the boat to Los Angeles at three day notice. It was here I discovered the curious effects Jaagermeiseter has on ones personality. One of our crew members is very fond of Jagermeister, she does not leave the vessel with out a bottle. It is almost medicinal. So after consuming an undisclosed amount of Jaagermeister I found myself yelling very loudly during Armins concert. Certainly louder than I have ever yelled at a dance party before.


Listen carefully you can hear me yelling


It is fair to say I was a bit yelled out the following week. I did however make a remarkable recovery in time to pick up my replacement from the Airport. If I have a solitary complaint about Vancouver it is the roads going to and from the Airport. It took us over an hour to travel one arduous ten kilometer stretch. I am not sure where all the cars are going that are on this road. I am pretty sure there is a lemming like offramp which goes straight to hell because it is an most un heavenly journey.

On Friday we had a small gathering to celebrate the end of the week and the group of engineers departing. To provide a suitable floating venue we commandeered the adjoining barge. If I do have some advice to party promoters who want to put on a boat party it is this. Barges are cheaper, infinitely more bespoke and rustic than any boat you will ever charter. 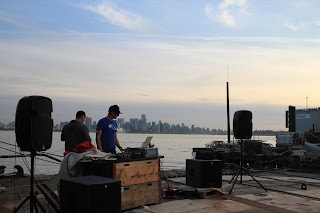 We had a fine party with some of the shipyard workers and some guests of the crew. It was my monthly chance to dust off the CDJ's we purchased for the boat last year. It was to have been a lead into to another famous DJ who happened to be playing in Vancouver, Arty. The core crew that left the North Shore were in fine spirits. The 55th Crew Member Jaagermeiseter made the trip with us. 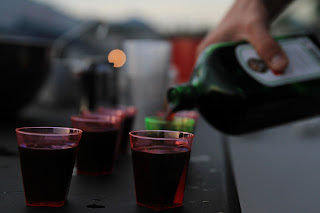 We made our way into the nearest Irish bar. Irish bars always amuse me. People are forever telling me you will never have a bad night at an Irish bar. I have had some positively average evenings at ones. This particular Irish bar had a cover charge and an ATM that was on holiday. It turned out we all had a great night at the Irish bar. Arty was not allowed into Canada so his gig was cancelled which probably was a good thing. I do remember yelling a lot at the Irish bar about how I was in an Irish bar. I phantomed out of the Irish bar before it was too late and caught a limo home. Thats right, after about 12am all of the Taxis vanish in Vancouver leaving limousines the only viable travel option. Earlier in the week I had chuckled at half a dozen crew catching a limo home. Riding in a limousine by yourself is a very sobering option.

The next morning Scott had the audacity to complain about his jetlag. I am not sure how Jetlag works in Scotland but the people you have flown to should not have the same ill effects. It was about now I let go with a Fruedien slip. "These four day hangovers(handovers) are not healthy". Thankfully I was able to get on a plane on Sunday for New Zealand.

New Zealand is great. I am reunited with my Wife, Family and Friends. I have a new dog who is quickly becoming a favourite. My adopted cat Ollie has been wisely absent.

It is good to be home.