Just as important as the multitudes of Kiwis following my blog are the numerous and notable fans I have collected on my travels. Sadly most of them have never been to New Zealand. Sadly many of them never will. Even more sad have been some of my tourist pitches of New Zealand. Last year when describing the New Zealand way of life to an English man.

'Kiwis, we don't give a shit about heaps of shit'

I may have been drunk.

Still this will not stop me from writing a bit about my time back home. Maybe some will venture down to our special little place in the future.

I arrived back home on a Friday morning. After conquering border formalities I greeted my Wife and we made our way to her apartment in the city. I had a delicious plate of bacon and eggs and I slowly unwound before we moved house. For the weak of heart I do not recommend moving house after 30 hours of travelling. It is probably the worst thing you can do. Still we accomplished it and I do like our new abode.

Being re domesticated in New Zealand has been excellent. We are staying with Annas brother who like me has a limited schedule during the week. Much of our week is spent finding things to do and hanging about. We are staying in Onehunga which feels like the country after the city. People are very friendly and it is surprisingly quiet given that we live on a main road.

It is here that I must start delving into photographs because I have had such a relaxing time I have not written as much as I would have liked.

I went fishing a couple of times on the west coast of New Zealand near to where I was bought up. I went with my father and we went very early in the morning. There is a very real beauty on the Kaipara harbour when the sun is rising and setting. 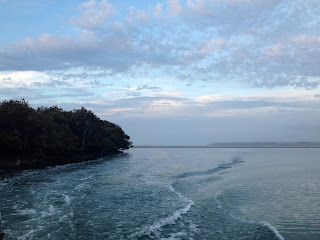 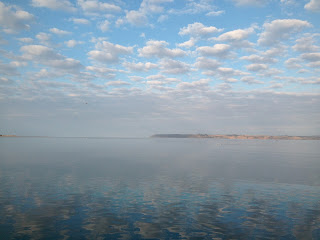 My fathers boat may be in a different state to the ships I am used to but I can safely say we caught more fish in our two outings that I have seen caught on board the vessels I now call my home.

Just as I was settling into life at home we boarded a plane and flew to Sydney for the weekend. We stayed with my Sister who I had not seen for many years. My Sister lives in a lifestyle bubbled enclave called Newtown. The bubble was rightly named because we stayed in the bubble for Friday and Saturday and could not leave.

I was lucky enough to be treated to a beautiful birthday dinner by my Sister and partner. We did a cocktail crawl on our way home. There were a few distinct reminders of what having a larger population affords. The first was window shopping at the Newtown gargoyle shop. 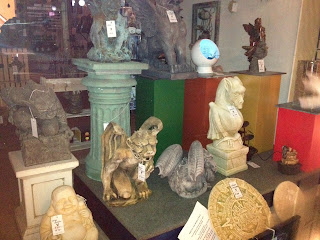 It is the first time I have seen a shop largely dedicated to Gargoyles. I did spy a couple of Dragons and you can see Buddha in the photo but Gargoyles were by and large the main attraction.

We watched some truly tragic 80's music videos when we got home. There is a channel pumping them out and the peak confusion hours are on a Friday night /Saturday morning. 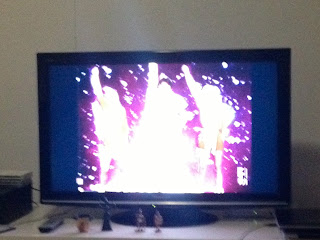 Another was on Sunday when we left Newtown to visit an old friend east. We ended up in Bondi Junction, shopping. I had to queue to use a changing room. This was a first for me ever. 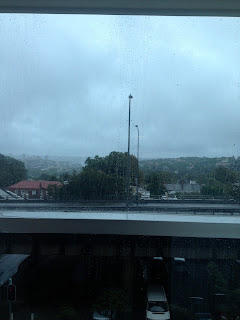 I am startled to say the most rain I saw in my whole trip home was in Australia. The New Zealand summer has been truly superb. On the Sunday night we ventured out again to see Above and Beyond. There was a huge crowd of people as many as I have seen for a dance party. Again the large crowd allowed me to experience something I have not experienced before. A lovely Australian threw a bottle at our taxi, nobody was hurt. My time home allowed an excellent revenge opportunity more about that later. 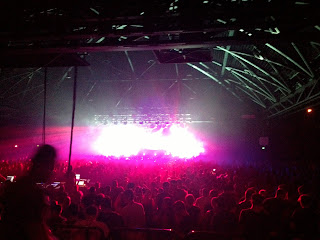 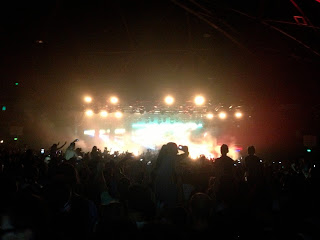 Above and Beyond were amazing. I saw a Unicorn. Enough said.

We had an early flight back to New Zealand. This was softened by a timely upgrade to Business Class. I slept the whole journey.

The next week I threw myself at learning a new programming language. I do not recommend doing this when you are on holiday. It made me excessively grumpy. I have a better plan for my next bout of programming. It involves more sample code, slippers and less coffee.

For Cam's birthday we spent a weekend in Matakana and went to a vineyard to see The Adults, Hollie Smith and Fat Freddy's Drop. It was my first experience of a vineyard concert. I found the crowd very diverse with families, experienced wine drinkers and the very young mingling amongst the vines. I am not sure where I fit in there but I did. 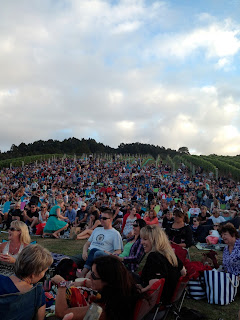 During a trip into the vines I did get to take this incredible photo of a bounding youth. 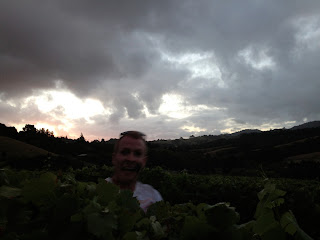 The Youth surfaced later engaging in an arcane art which I think is called line dancing. 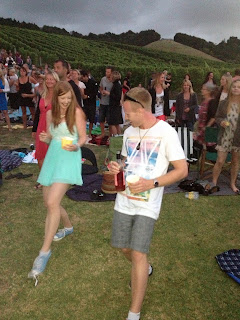 The diverse crowd was best summed up waiting in a queue to buy some wine. There was a quite possibly stimulated but harmless gentleman offering free hugs to people in the queue. His strike rate was low, probably 30%. Some people were quite rude. 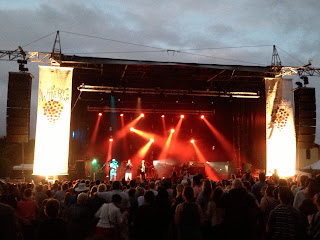 The next week was spent readying our house for Anna's 30th birthday. Being in charge of AV I did exciting things like running network cables under our house. 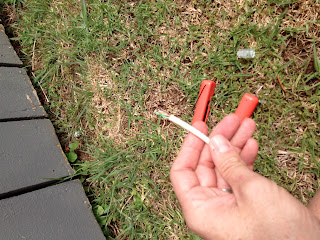 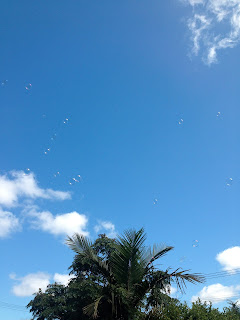 I turned the bubble machine on as soon as I got it home. The bubble machine invoked a magical day spent in our garden with friends and family. Cam and I acted as stewardesses for the event and I have a new found appreciation for them and what they do.

I do not have to say again how wonderful to see my almost long but not lost friends and family but I will. It was wonderful and I look forward to seeing you all a lot more regularly.

Our household was a bit lazy the following two days. My adopted cat Ollie did show up. He seems to like hanging out and his schedule seems to be very compatible with mine. 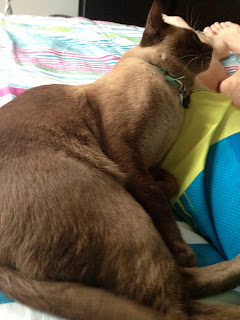 By now my holiday was in full swing. I started playing computer games, reading books. Doing household chores. Grocery shopping. This was heaven. A reminder that I do in fact have a job followed the party. An email enquiring as to when I could come back.

Current cruising schedules have meant I will return on the 3rd of March. Bummer.

Not to worry there was life in this holiday yet. Let us go to an Island let us go to Kawau Island. I am ashamed to say that the skills I learned as a deckhand quickly evaporated when I stopped working on deck. This is not surprising given the way my body and mind resisted learning sailing arts. I embarrassed myself trying to tie up an aluminium boat we used. 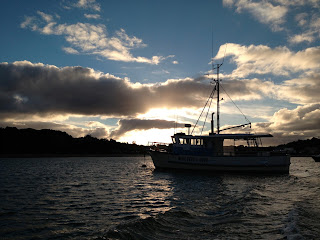 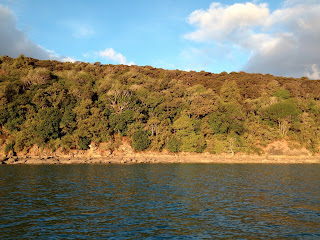 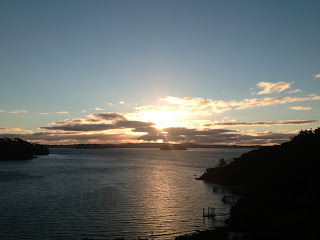 It is here that this tale turns dark. I think this will be the most polarising content that I have published on the internet. I am going to write a lengthy defence. I advise that you stop reading if you are fond of marsupials or are easily offended.

When we arrived at Kawau there was a strong smell. It was the smell of two dead Wallabies. Wallabies were introduced to the Island in our distant past. They have no place in New Zealand and remain a protected pest. On the Island there are two types of people. People who feed them and the people that feed them poison.

Two Wallabies were found in differing states of decay. One was put into a bucket and made the long trip down to the water where it eventually found its place on the sea floor. The other Wallaby was more intact and would not sink. This dead Wallaby became a symbol of our frustration. A beacon of Australian arrogance.

One of our brave crew tied the Wallaby to the end of the wharf. It was our hope that fish would feed on it and we would find it dispersed. All life came from the sea why not return it? Sadly the next morning the Wallaby remained, goading us with its corpulent flesh.

We needed to give it a proper sea burial. Sadly we did not have an Australian flag to shroud it in. The best thing we could come up was towing it out to sea and cutting it loose. Someone would mumble Waltzing Matilda or something. 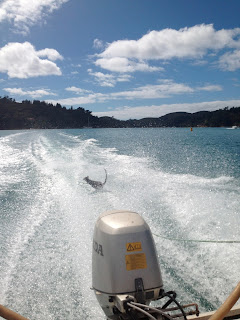 There is some video footage of the Wallaby waterskiing but after viewing it carefully and repeatedly I do not think it is wise to share it on the internet. It would be an international incident and I do have to fly to Australia on my way back to my boat. If you are desperate to see it you can solicit me on Facebook for a viewing. I do hope the person that threw the beer bottle at our taxi gets to see it. Maybe it will end up in a Straya day video.

Need more examples of New Zealand quirkiness? I saw this in quite a large newspaper, The Herald. 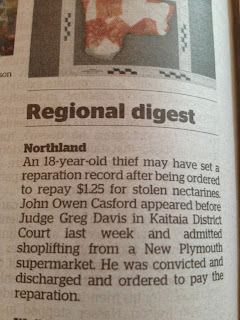 It appears that we do give a shit about stolen nectarines.

I have about ten days left in New Zealand. What do I have planned? More of the same minus Wallabies.