At some point during the year of the Dragon 2012 the FireDragon forgot how intrinsically magical he was. It wasn't until the full solar eclipse the FireDragon remembered how to use magic. 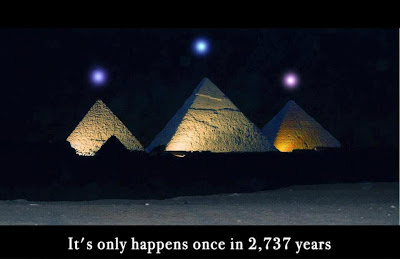 Planetary alignment that will take place Dec 3, 2012 is dead-on alignment with the Pyramids at Giza.
PLANETS INLINE: MERCURY / VENUS / SATURN


Mythical creatures aside. I have landed a real dream job. I will be working as an AVIT officer on a very large Motor Yacht. The vessel is the top ten size wise and is very new. We have an interesting itinerary and I will share some more details when I know my non disclosure obligations. This is the big time.

Somebody asked me what an AVIT officer is. My explanation is that an AVIT is basically a Dan. Anyone that has visited one of my abodes over the last 10 years would have seen the foundations of a career as an AVIT officer. Entertainment/Computers/Gaming and Music. I will be getting paid to be myself. I think that is the best possible job.

The huge thing for me is to be finally working time for time. Time for time means I will work two months and then have two months at home. I will get paid over 12 months.. I wil probably drive my wife mad but at least now I will be at home with my friends and family being annoying :-).

I can not stress what a difficult year it has been. I have seen my Wife for about 1 month over the last year. I have doubted what I have been doing many a time. Unfortunately my working environment was starting to erode my confidence. I have not enjoyed living in Qatar. I have no affinity with the culture its people and do not want any.

Working at sea has and continues to push me in ways that I never thought possible. I always knew if I could survive that first season I could achieve anything and this is just a continuation of that.

By the way I have to say thank you to Richard Dunnais who's teachings must have rubbed off on me as I have never been called humble in a reference before.

I thank you all for your support. I certainly felt the love last night. Sometimes you just need to ask for it.
Exciting times for this FireDragon. I feel like my whole life has lead me to this juncture. Very happy days indeed.

Well I passed my course.

It was very difficult. I wager I did more study in two weeks than I did in years at high school. I was lucky that my hotel was only 3 minutes from the Marine school and I did not have to walk past any pubs. I did do some nice walks early in the morning and I marvelled the dampness that pervades urban England. You can feel it encroaching your senses. It made a pleasant change after having sand enter your pores for five months. 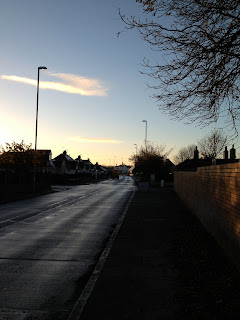 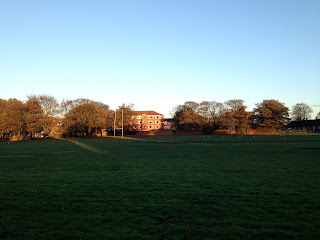 After the first week I was spending so much time with my books that I had to pass up a trip to Cambridge to see some old young friends. I did have a study break of sorts and went into Newcastle. I wrote earlier how I was struck at how friendly the people were. I was told later in my trip that the Southshields locals think of the Newcastle people as being stand offish. I guess nice is just relative to what you know. 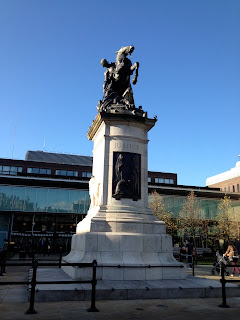 I engaged in some retail therapy. I returned to my hotel in Southshields. I have created some rockstar hotel rooms in my lifetime. This is about as rockstar as my hotel room got in my time up in Newcastle. 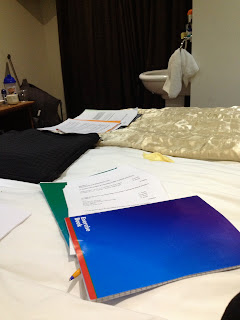 That is a handbasin in the background not a toilet basin.

By about the following Wednesday the participants in my course were starting to get a bit frayed. I was still gaiting around and trying to seem uninterested but some of the practice exams were making me angry. We were to have our real exams on the Thursday and a practical Oral exam on the Friday.

The following Thursday our sole master mariner on the course broke out in hives right before our exam. It was at this point I started to get a bit uneasy. The two Irish and Scotsman on my course went for pints while they waited for results. It turned out we had all passed. Most of the tension disappeared. 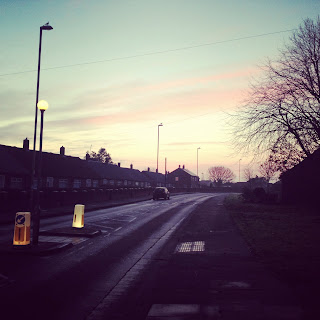 I passed the Oral exam on the Friday. I then had the perfect post exam relaxation. A session with the Brumbler the Pocket Battler who just happened to be doing a course at Southshields.

We met at a cheap pub and started drinking. It turned out it was the wrong pub as we were supposed to meet some Engineering cadets who had been doing advanced firefighting with him. Advanced firefighting sounds very dangerous. Brent was sporting a burn to his foot after getting up close and personal with fire. After witnessing somethings later I could see why this happened.

Reunited with his classmates I set about showing there are clearly defined boundaries between New Zealand and Australia. We are longer limbed for starters. We also are more cultured and less prone to rash things as would be demonstrated. Brent and I have spent good chunks of time in Italy, We both look forward to returning to Italy at a later date. Our charming company meant we were added to the Cadets table at a classy (for Southshields) Italian restaurant.

Upon reaching the Restaurant we were told to behave to an impecable standard. There was some nebulous connection for one of the Cadets to the Restaurant. We destroyed this rule after about 30 seconds of getting our first rounds of drinks. One of the Welshman overturned Brent's Italian bira showing us all how flexible he wasnt. 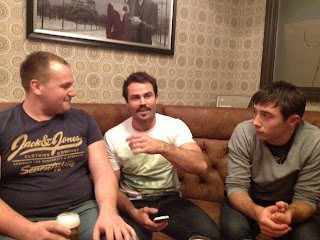 We were ushered to our table to stop disrupting the diners waiting to get tables. We then started swearing a normal amount for Sailors and soon to be Sailors. We were warned multiple times for making too much noise (swearing) Brent and I then decided to stop swearing in English and start swearing in Italian. I started ssshing pretty much all interactions of a non volatile nature.

We ate a very average Italian meal to Brent and my own best of Tuscany standards. The menu was definitely the most Italian thing in the place. Brent and I had a celebratory Brumble which was vodka/barcadi and a local energy drink. We dubbed it the Newcastle Brumble. 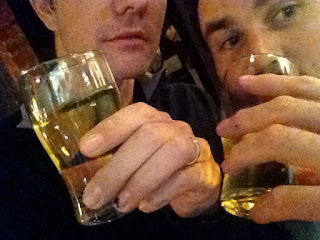 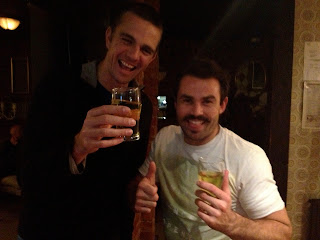 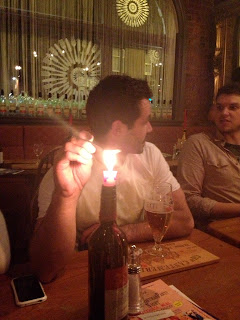 At some point Brent decided to start cooking a spoon with a candle. The candle resisted ssshing.

I remember something else refusing sssshing.

After dinner we decided to treat the cadets to some Limoncello. 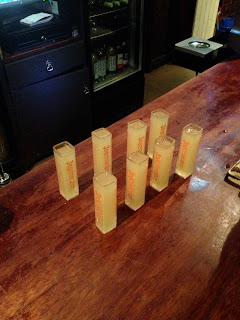 I made the very brave have an espresso with a little drapple of milk a Machiato if you will.

It is here the night took a turn for the unknown. We went to a very vibrant rock bar in Southshields. Brent swears he felt very amplified. I saw things I have never seen before on a dance floor but I had to leave with one of the Cadets pushed someone to the ground a couple of times. Apparently nothing came of it, maybe its a local custom. I did not hang around to find out.

The next morning I arose early with a considerable hangover. Brent however slept through our taxi and I had to ring him late to wake him up. He did come through a taxi eventually. We had a very amusing ride to the airport. Brent had footprints all over his shirt from the night before. I told him he had been all over the dancefloor horizontal so that was the logical explanation.

And fair readers that was the second time I have known Brent to affect airports by just going out for a couple of drinks.

At the drop of a hat

We had quite a successful boss trip last week. It lasted about six days and we had some very good feedback from all key steakholders (intentional pun).

Directly after the trip our Captain congratulated us. He told us we had three days off and all crew were entitled to a massage from the local therapist. This was pretty awesome news.

Joe and I went off to our surfing spot. We ironically took a personal photographer Theo. We were commenting in the car how out of all of the bosses numerous entourage the photographers seemed the most worthwhile. That and the Tea/sisha man.

November looks to be the best time of the year for surfing and upon reaching Police bay we set about wooping and making convincing impressions of people who know how to body board. Theo did a great job of cataloging our outing. 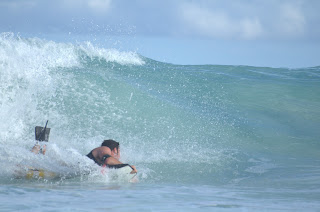 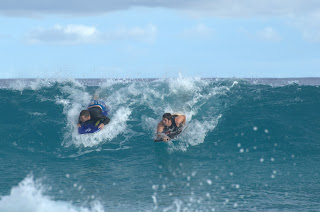 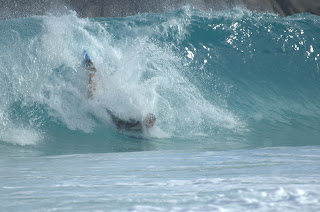 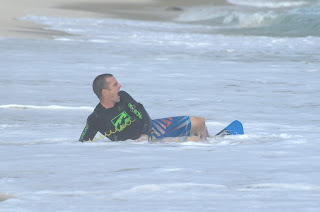 I wiped out a couple of times quite spectacularly. I also cramped up at one point with such fervour that Joe thought I had been bitten by a shark. On our way back to the boat I broke my alcohol sabbatical of two months with a couple of glasses of red wine. It was dirt cheap and tasted divine. Abstinence makes the heart grow fonder.

I went into a deep sleep after eating some dinner and awoke to what could only be interpreted as a nightmare. Joe was telling Shane and I that we has to take the boat to the Middle East.

The mood on the boat the next morning could only be described like a zombie aflicted morgue with a hangover. It was a bit of a slap in the face given that we have only just left the Middle East. Having had one of our best charters ever and to be heading back that way.

Luckily for the Chef and I. We had prior plans. Mine involved flying out the day the boat departed for Newcastle on Tyne. I'm writing this from the perpetually confusing Charles de Gaul. Everytime I come here is an ordeal. I'm quite stoked I got onto my plane after four bus rides.

Newcastle after being away from the western world for so long is marvellous. I have been struck by how friendly everyone is. More about Newcastle later in the week. My heart goes out to my home and pseudo family which is beating its way up to parts unknown.

The moral of this story. Seize the day and your board. You never know what might happen or what might seize up.