The Pocket Battler and the Heights of Stupidity

I have not written about a crew member for a while. But as chance would have it a real gem has come into my periphery and I have dubbed him the Pocket Battler. Lengthy back story time.

Recently I have been engaging what can only described as a foolhardy endeavor, The exercise began soon after we arrived in France. Our Captain had arranged to have some infrared cameras installed up our rather large mast. Instead of this being done when we had full scaffolding and reasonable safety in Barcelona we were to put them up with no scaffolding and in an exposed marina in France.

This probably would not have been quite so bad if our cabling had been where it was supposed to be. After a close shave with the foremast, Sam and I ran miles of cable up the mast. I think there was at least 30 meters spare when we finished. The company responsible for installing the old cameras could not be bothered using this new cable and promptly cut it short and spliced in on the old cables.

Fast forward to France and the people responsible for installing the new cameras butchered and removed our old functioning cameras. They could not find the cables that they needed and gave up. So on a Monday morning I was sent up the mast to find the new cables so we could get the new cameras going.

Confession time. I am not overly keen on heights. I am prone to vertigo if I stand up too quickly and would not climb a mountain. Leave the good mountains alone people. Working as a deckhand did get me accustomed to working up masts but not to the extent of the last week.

My first exploratory trip up the mast had me strapped in a full climbing harness. After some thoughtful probing I discovered one of the cables that we needed. It was about 5 meters shorter than it needed to be an in the wrong place. After removing a cover I found the other cable which was a similar length. This is where things get interesting. The art of successful cable running relies on a few simple rules.

Having broken three rules I was in a precarious position both physically and topically. Up until now I had been hanging on for dear life in a harness. To progress further I would have to ascend the extremities of the mast in a bosuns chair, winching myself up. It was at this point of this glorious stupidity that I shed a tear for my sensible self. My brain was revolted at my bodies devotion to such an arduous and foolish task.

I also discovered by accident that if you clench all of your muscles for hours at a time hanging on for dear life you will feel at least twenty years older the next day. Thankfully there was one silver lining. A diminutive Aussie chap turned up named Brent and for continuities sake I have named him the Pocket Battler. I first met Brent in my first season working on boats. He had also made Viareggio home and is a good friend of that famous Italian taxi driver Lucca. Brent is not afraid of anything, has worked as an electrician, is proud of the various plates and bits of steel he has supplementing his skeletal frame. He quite literally was born to do dangerous things. He also is a league supporter which on this boat is very rare. Brent threw himself at the task and we soon had one camera working. Sadly the next day before we left both cameras died. The installer said we had a bad power supply to them and we would have to run another power cable.

Naturally this was not going to happen when the boat was moving. That would be really stupid. However it would not be as stupid as what we did when we got to Port Said in Egypt. Egypt is not one of my favourite places and Port Said is about as unfavorable as it gets. Within seconds of docking a person of ill repute was trying to sell Brent and I all manner of quick fire souvenirs. However, we had a much exciting excursion planned. We would run a power cable up the mast in the dark with a shit load of wind......

That probably sounds fun to the crazy ones out there. I can assure you it was not .To give you an idea of the conditions the wind was gusting strong enough to blow our aluminium ladder clear across the top of boat. The Egyptian courtesy flag looked like a rigid piece of steel. I contracted a cold that I still have not shaken. The Pocket Battler though was wearing shorts and smiled the whole time. Quite how he survived is beyond me. He scurried up that mast and did practically everything. I was relegated to a support role where I tied his shoe laces before he went up and shivered below. Now I must point out the Pocket Battler does support Manly which may go somewhat to explaining his sense of recklessness.


Video of the Pocket Battler in the thick of it.

We finished up at 11pm that night. It turns out the problem was not the power cable. The problem was much more involved and needed more exploring in Sharm El Sheik. Thankfully we had sun shine in Sharm El Sheik and the cameras are sort of working. I am still not convinced these cameras are the answer. The Pocket Battler is the answer but I have forgotten the question.

Email ThisBlogThis!Share to TwitterShare to FacebookShare to Pinterest
Labels: EGYPT

Well I think this thing still works. I have been having an extended break from blogging. I had an incredible holiday at home and was lucky enough to see and do everything that I wanted. My objective was to disconnect from everything over here and reconnect with friends and family. I actually started writing up a passage of what happend at home and I hope to finish it one day. But things have been moving very quickly since I got back and I have had no time to write, let alone relax.

My first bombshell was learning that my boss has handed in his notice. This is less than ideal but given the stress he has been under for our refit it is understandable. The second bombshell was learning that we were leaving the shipyard as planned. This is incredible and I do not know many boats that have left shipyards on time in the Mediterranean.

Obviously leaving Barcelona was a sad time for me. I had to say goodbye to two very special people Sam and Nancy. When El Fuerte and Uncle Phil left me on RoMa I was a blubbering mess. I was a less a blubbering mess for Sam and Nancy because I was a bit philosophical about it. I travelled across France to see Uncle Phil. I travelled across Spain to see El Fuerte. I'll fly to middle earth to see my Wife. Family and Friends. Of course I will see Sam and Nancy again. Ain't no mountain high enough Bitches.

From Barcelona we steamed to Antibes, France. My long dormant French part of my brain has stirred to life. Slowly my Spanish brain will eb and fade. We are here for a little while and I must say it is quite nice to be somewhere familiar I took one of our Engineers to Monaco today and I have to admit I make quite a good walking tour guide. Another avenue to explore, I really am a talented fellow.

Speaking of which. I got to play music for 4 hours at our dock BBQ before we left. I think I did quite a good job and had some good feedback in the morning. I drank a healthy amount of beer. 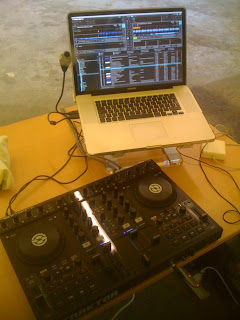 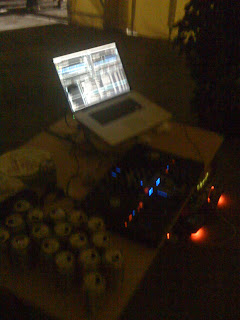 after
I do not remember drinking all of that beer. I will blame my many and numerous fans.
Posted by El Draco at Monday, March 05, 2012