Last Thursday I was subjected to one of the most gloriously decadent dinner parties since the fall of Rome. With one of our team leaving us to return to Rosario in Argentina and an Irishman going on holiday it seemed a pretty good opportunity to let loose with the boys. Organizing was left to Hector who in his infalible organizing capabilities left things until Thursday. Unfortunately the really pimp steakhouse in Barcelona was fully booked. Hector found another one in a more vivacious part of town and measuredly told us "its good eh". In retrospect this more family restaurant was far more appropriate for our gang.

Sam and I arrived on time and after some circumnavigation we arrived to find Martin and Mario inside. The restaurant was multi roomed and we entered the main part through a small passage way. We were put in the back in a huge room which had a slanting floor. This was a first for me and (un)wisely I decided to sit at the foot of the table. Hector arrived soon after and I found myself in between Sam and Hector. Sam and Hector then proceeded to have an escalating fight which lasted 4 hours; started with napkins, continued with bread involved red wine and ended up in wrestling. Perhaps I get ahead of myself I should describe what caused this escalation.

Other members arrived and we soon had 14 very hungry men who wanted a lot of red meat. The waiters foolishly bought us menus and were shooed away by Hector and Martin who from the sounds of things ordered a whole cow in various states of distress and temperature. All I could hear was mas carne MAS CARNE(more meat MORE MEAT). The wine was soon flowing and talk soon flowed into how good it was there were no women to distract us, how good the wine was and how bloody hungry we are all were.

Over the course of the night everyone got progressively drunker except for our clever Nepalese engineer who elected to drink coke all night. Hector transformed from a somewhat cheeky fellow into a whirling dervish. I actually caught this transformation on camera.

When I talked about the cow earlier I was not joking. Over four hours we ate about 11 different courses of food and I am pretty sure we ate a good part of an honest sized cow. 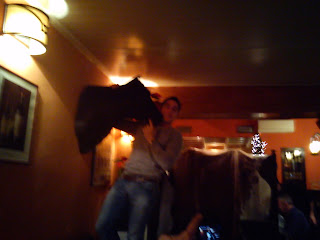 an honest cows head
The amount of wine we drank beggars belief and the waiters left us to to serve ourselves wine, so loud and engorged we became. We were serenaded during parts of the night by the resident guitarist. We tried to put him out of a job by getting Martin to sing for us but he was not that keen on giving up his guitar.

My favourite part of dinner was the large and nitrogen enhanced steaks which only a few of us could put away. 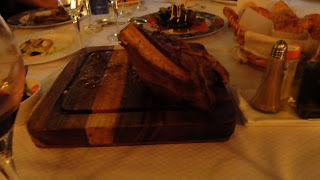 Of course I have neglected what was going on either side of me the entire meal. What began with a bit of napkin slapping between Hector and Sam quickly evolved into the Falklands II and I actually sat back from the table for sections of the dinner when there was no food to limit the collateral damage felt. 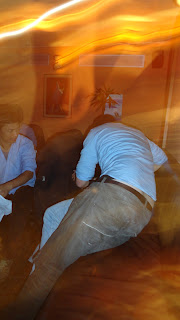 With the food slowing down we entered a somewhat serious part of the evening where Mario felt obliged to dress up in a napkin and spout forth how he really felt about quite a few topics of which the gravity still escape me. 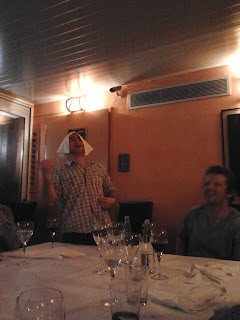 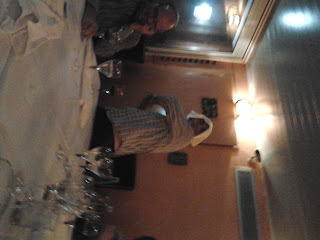 There was a flaming desert served. It tasted amazing and it probably did not need the alcohol, neither did we. 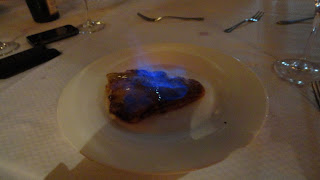 I left the table after 1am and before 2am. I arose to the worse hangover I have ever had and although I made it to work I was violently ill and have not drank a drop of alcohol since. I fear I have destroyed any love for red wine that I once had. Mario and Sam made it in. Martin woke in another part of Barcelona sharing his bed with a lady, I think he convinced her that he was a singer at a bar. Hector did not make it into work until late. He had lost his phone, cash card and bicycle card on his way home. No one saw him leave. I think he just whirled home like a tornado losing parts of his wallet as he went.

As you can read there were a few casualties in the war but it was an incredible night.

I will put up the details for the steak house at a later date. It really was a find and indicative of the wonderful eateries all throughout this city. Company not included.