In the last two weeks we have travelled from Barcelona to Palma around to Menorca up to Corsica and onto the French  Riviera. For the last two season in the Med my cruising has been limited and it was quite invigorating to have an itinerary and the ability to take sneaky photos every now and again. The scenery and weather were stunning. I got thinking in the last couple of days that working outside on a Super Yacht is a lot like having “postcard vision”, that is to say you have picture postcard views all day long but a lot of the time your interaction is limited to stretching your hands out and imagining if you could actually touch the vistas.

Enjoy my postcards. Captions not required but recommended reading. 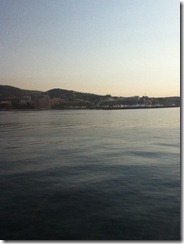 After a delightfully smooth trip from Barcelona to Palma this is the sea state that greeted me on arising. Silky. 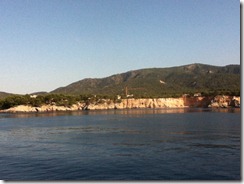 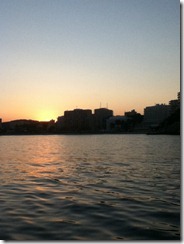 The south and west coast of Palma is seriously rugged. This is a face, just turn your head 90 degrees to the left. 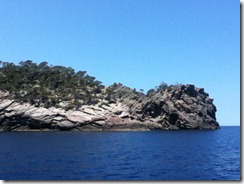 I call this one the meat tenderiser. 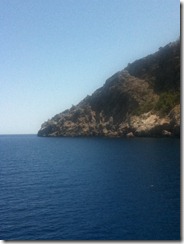 More outgoing out crops of rocks. 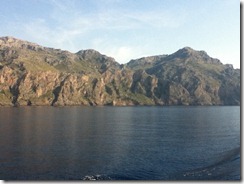 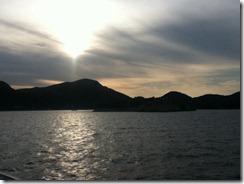 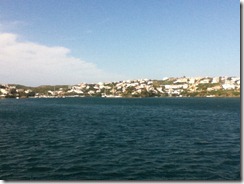 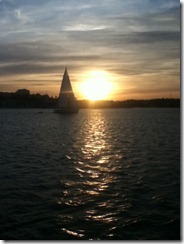 Menorca delivered the best sunset I have seen all year. 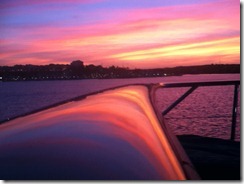 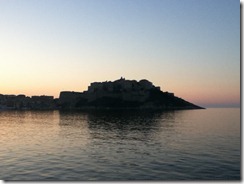 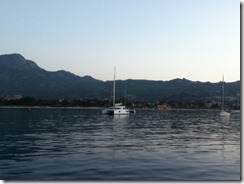 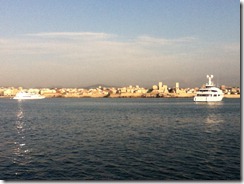 We finished our trip in Antibes, France which is as fitting a place as any to finish because we started our Yachting careers in Antibes.

Having been on nightwatch for the last week I slept through a crew day off of jet skis, wakeboarding and other fun things.  I actually got out of bed so I could do another night non stop and ferry drunken people back to our anchorage. Me = Saint.

Needless to say we are moving to Genova tomorrow and I am looking forward to getting my Italian on. Anna and I have a nice relaxing weekend planed in a Spa resort.

My brain and body both desperately need untangling. I look forward to sharing with you some of my dastardly plans for the next year. Maybe I am not quite a Saint just yet.

The day after the MOB incident I was reminded quite vividly of why I do what I do. The first example was a pod of Dolphins coming to say hello mere minutes after I had said it was about time my Dolphins I saw last year came and said hello.

If you can not see the video you may need to befriend me on facebook.

The second was playing around in the galley with the Sous chef creating some designer cup cakes. These cup cakes were just what the doctor ordered, taking the edge off what had been a harrowing few hours. 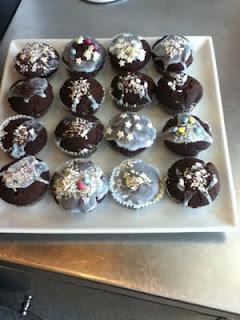 You will be happy to know that after a very busy weekend to turn the boat around. Our first trip of the Med season has fallen into a comfortable routine. The sea is calm, the sun is out and things are beautiful if a little boring.

Previously when I have written about about night passages across the worlds oceans, I have raised the ever present question, what would happen if somebody fell overboard? On June the third at approximately 3:30 am my crew and I experienced this first hand.
We left Falmouth on the first of June bound for Gibraltar and then Barcelona. We had a small weather window and our Captain had warned us things would be a bit bumpy on our second evening.

I came onto my regular watch at 12am. The wind and sea was building but I have been in worse. I was doing regular rounds around the decks to make sure everything was tied down in addition to my hourly engine room checks. Shortly before 3am we started to experience winds in excess of 40 knots and the boat began to roll an uncomfortable amount.

We have three jetskis and a lot of gym equipment on our bridge deck. The first sign that things were getting a bit hairy was the gym equipment having an impromptu workout with no human interaction. By now our Captain was up and at the helm and soon after he adjusted our course to take us away from the worst of the weather. By now our gym equipment had been flatted by the sea state and our rolling. The first mate and I set about trying to secure the elliptical trainer, two exercise bikes, treadmill and a weights bench which had all been shunted to one side of the boat.

In a twist of fate I then went down to the engine room and was there for about ten minutes righting laptops and tools which had been rattling around freely. On my return to the bridge I then heard what no one wants to hear at sea over my radio. "Man over board Man over board Man overboard" My Captain has since told me it was as if my radio was giving me an electric shock the way I contorted on the couch. I was sent outside to assist the First Mate who I thought had fallen overboard into the water. The entire crew got up to assist and be "spotters/lookouts"

The First Mate told me to get some lines out. I started throwing life rings and headed down to the main deck. I still did not know who had gone overboard. By the time I got to the third life ring I wrenched it out of the wall bending the steel brackets completely back. Adrenalin "good for bending things". We have man over board drills regularly and I then went upstairs to help launch the tender so we could recover the man overboard.

The man over board turned out to be our Chef. Whilst I was down in the Engine room, one of our 300kilo jet skis had broken loose and had started flying around. it destroyed two large doors which fold down when we launch jet skis or tenders. The Chef had heard this and had gone up to assist the first mate. The murderous jet ski had lined him up and had sent him out to sea.

Of all of the people to go overboard in the middle of the night in terrible conditions. Our Chef was the correct person for the job. He swims everyday, is Australian and is completely unflappable. Afterwards he told us how he had just floated about conserving energy waiting for us to turn around.

Launching our tender proved to be very challenging. The rogue jetski had to be turned upside down to stop it from taking other victims. The now quite violent rolling action of the sea had got worse because we had to turn around. When the tender finally entered the water both of the stern mounting points were wrenched off.

By this time we had a visual on our Chef. Considering it was pitch black and we had trouble even standing on our own feet, this was a miracle. The First mate and Bosun were somehow able to get him on board the tender. By now the sea was so bad that at times we had waves coming over stern and at times you could see the propellers out of the water. No mean feat when the boat is 56 meters long.

It was impossible to retrieve the Chef from the stern of the boat. Our Captain felt our best option would be to get the tender along side and put out one of our side hydraulic companion ways. Being long of limb and quite adamant I will not die at sea I was chosen to lie on the steps and help pull the Chef in from the tender. This was hair raising stuff especially when my legs started to go under the very cold water. I have never been happier to hold an Australian.

We abandoned hope of recovering or towing our tender so the next mission was to get the Bosun and First Mate to safety. The Bosun was able to jump aboard. The First Mate jumped backwards towards me and I yanked him out was well. His head hit mine quite hard and he is lucky I am forever hitting my head on things and was not knocked out.

With everyone aboard we were finally able to relax. We lashed things down as best we could and I think everyone went into a mild form of shock. My thoughts were.
It could have very easily been me and I could have been working alone
I probably will not write about how my Mac book Pro was stolen in the Palma airport. It now seems trivial.

On a more positive note if we had reached Gibraltar as we intended we would have ended up in a fuel dock fire. That is the very dock where we normally get fuel. We would have been very close to the explosion. Fire at sea trumps man over board.

Well we made it to Barcelona. I have a story penned about an exciting incident that happened on the way. It just needs to be edited.

From here we are heading to Palma with our boss and will be moving around the Balearics. I am hoping he gets lost on a dance floor in Ibiza and we finish our trip there. Fingers crossed :).