A very respected fan emailed my wife the other day enquiring in to whether I was actually working in the Caribbean. To be fair the words written here do not dwell overly on my work or lack there of. Sometimes my life is quite incredible, take for instance my birthday month. Strange otherworldly forces are often at work. My boss who was supposed to leave on my birthday and left a couple of days early. This allowed me a monday off and a quite intense pre birthday celebration which left me thinking I was mortally wounded the morning after as I struggled to remember what I had been celebrating.

We went to an incredible beach. Lord Lovejoy and I had an underwater photo shoot. 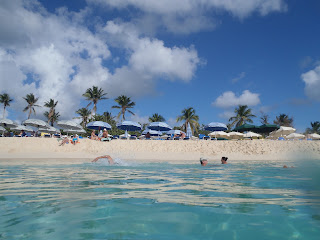 That is me swiming towards the camera 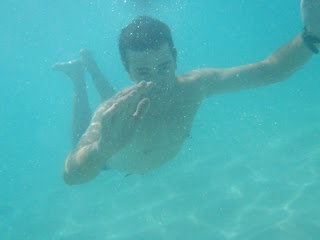 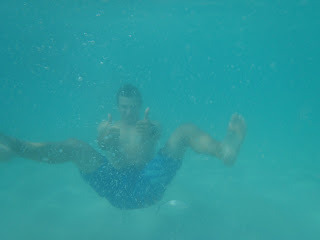 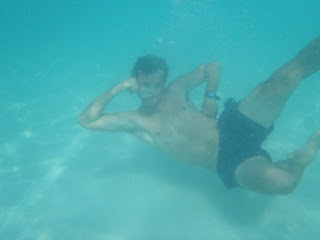 On the Tuesday, my birthday we started a four day jet ski course. This gave me a day of riding jet skis at breakneck speeds and all of the time, earning money. 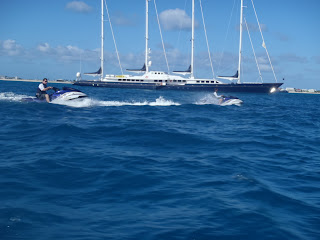 After a busy day of jet skiing one of the fantastic chefs who live on board prepared me a marvelous pavlova to share with the crew.

I then enjoyed a dinner with the crew and was serenaded by the staff of the restaurant. Someone thought it would be wise to buy me a rose to use the very next day in our Jet ski course. 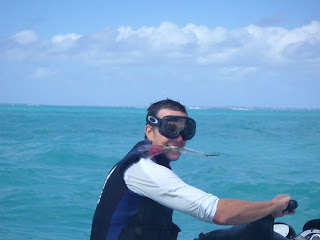 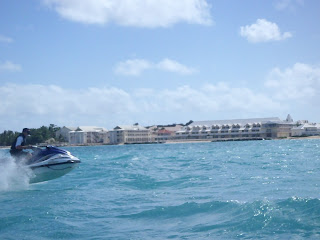 It has become painfully obvious that I do indeed have a millionaire playboy lifestyle. At least some of the time and usually around my birthday. Do not feel pity for me.

Authors preamble: I started writing this last year, it may suffer from mixed tenses but we are all adults and it's been intense.

As inked earlier Saint Maarten the place to be in this part of the world if you are a super yacht or crew. Having been here for a week now I can safely scribe my own opinion. In a nut shell Saint Maarten is deliciously decadent. With filthy French and dirty Dutch hemispheres a wayward sailor is easily stimulated with very little effort. The three ways of spelling the islands name show the multitude of ways the island can be approached. 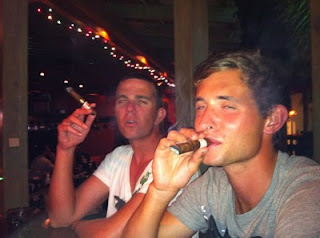 Witness photographic evidence of our very first night out in Saint Maarten. That is me and Lord Lovejoy sucking back on some premium Cuban cigars. Don't we look postively chuffed with ourselves?

I love hot sauce. I met my match in Saint Maarten. This hot sauce blew my head off and made me cry. 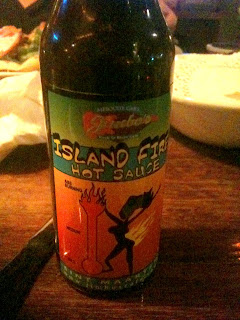 Pay close attention to the label.

How do improve a sublime mojito? 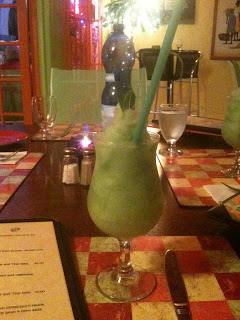 Well, you freeze it.

With a very busy couple of weeks ahead Anna and I checked into a quite tasty hotel/resort for the weekend on the French/Dutch border. We had a few vague plans of what we would do but what transpired was about as rockstar of a weekend as we have had without throwing a television into the adjoining swimming pool.

Things started less than innocently with a couple of cocktails while we waited for our room to be ready. It continued with a free bottle of champagne which inspired us to head to the in house Casino. Did I mention the hotel was huge, Kiwi's it was at least the size of a decent sized paddock.

We won a lot of money and started furiously socialising and tipping (when the icing of your disposable income comes from tips, tipping becomes very important). The free rum punches began to take hold and some less than astute bets were made. At two am it was time to retire to our room. Room service was miraculously ordered. I promptly fell asleep dreaming of frozen cocktails. Apparently when the room service arrived Anna tried to feed me, I responded in kind with a flailing arm much like a chaotic one armed bandit. Anna then achieved a masterstroke, she spilt a lot of San Pellegrino on her laptop.

The next morning I awoke to a few frights, the first of which was a rash covering my chest and legs. It appears my working class skin is averse to 300 count cotton sheets, that or the washing powder used in the hotel. I am going with former, it is far more dashing. The second was that the hotel room looked trashed.The third was that Anna's beautiful pink laptop had died, was not going to be bought back to life and our planned shopping trip to duty free gadget land Philipsburg had taken on a new dimension. After some a therapeutic buffet breakfast wearing our darkest sun glasses possible we caught a taxi to Philipsburg.

Philipsburg is a cruise ship town, it literally throngs and fades with the entrance and egress of cruise ships. After some zig zag staggering and half hearted bartering with shops we purchased a nice shiney new iPad for Anna. Still feeling pretty rotten, we joined the dinner time rush and went to our first American style KFC. We was hungry. Deep perceptive impressions from this outing are as follows,


Leaving Philipsburg our taxi was stolen by a family of Brazilians. We had waited half an hour for it at a stand, and this family stole it right before our eyes. Having not had many dealings with Brazilians we actually thought they were Italian, we looked so woebegone they thought we were American. This slight has been noted and I will be taking it up with the next Brazilian I speak to. Whilst I am at it, Portuguese sounds like Spanish spoken by a retard. Thanks Russell Peters.

The rest of the weekend was a lot less rockstar. We did some secret santa shopping in the foyer shops of the hotel. Got a late check out of 3pm and made our way back to our home with the satisfied feeling of having spent a lot of money; eating, drinking and sleeping. Ah the beauty of consumerism.

What else have I learned about Saint Martin. Well it is here that I must tip my hat to my roving reporter and cultural attache Lord Lovejoy. He has busied himself about the Island taking photos and making memories so I can be more selective about where I go.

The Saint Maartin Airport is a one of a kind, The end of the runway backs onto a beach and it is an unofficial tourist attraction to hold on the airport fence and get thrown back by the force of the jet engines. 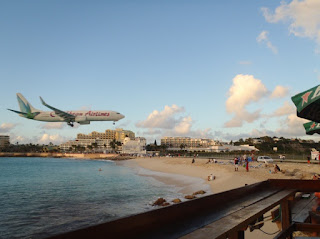 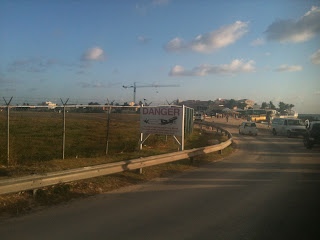 There are a lot of Casinos here, like 12. For someone that visits Casino's once or twice a year I studiously doubled my quota last year and have already reached my goal for this year. Did I mention we are going to be here till April or May? Saint Maartin is a floating Vegas. If I did not have so many family members reading and was not such a prude I would rabbit on about vast array of Strip Clubs.

What I can do now is post a flyer for a party that is on this weekend. 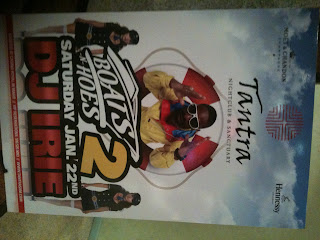 Since the new year a sea change has enveloped our crew. 11 out of the 13 are engaged in some form of exercise and/or diet regime. I have thrown myself into this along with beautification. This evening I had a pedicure from a charming latino man who wanted to paint my toe nails. I reclined and gracefully declined. Maybe next time.

What next? Well work of course and there are some more traditional tourist attractions to engage in like zip lining. We are also hoping to get an apartment and live ashore. Imagine that!

I can feel the masses clamoring for more information on James. There could be a crew profile on the way.

Till that painted toe nail next time. Ciao.
Posted by El Draco at Thursday, January 20, 2011

Have hindered me putting up my latest masterpiece. I have not been able to upload an exceptional video demonstrating island life. I will need to seek refuge in a bar to upload it. It will be worth it.
Posted by El Draco at Wednesday, January 19, 2011

In a year where I have driven a Lamborghini, eaten lobster twice and snacked on caviar it seemed fitting that I spent my Christmas period with the elite of America in Saint Barths. Let me gloss over the fact that I was working, that's better.

Do you want to know the definition of snob? Seeing some facebook status updates about people being in LA and wanting to post “good time to be in LA everyone important is down here in Saint Barths with me”

What have I learned in my menial capacity down here?

Saint Barth's is the Caribbean version of Saint Tropez. For some reason really wealthy people on holiday like to be in warm places where people speak French. It makes them feel cultured or something. I have never got this feeling but I am not stupidly wealthy or stupid for that matter. The French are laughing all of the way to the bank. An American newspaper costs about $15 US in Saint Barths.

Saint Barths is far better than Saint Tropez in my opinion. The beaches are a lot nicer and WAFIS can still rock up in a dilapidated sailboat amongst the billions and pull fingers at the glitterati. Try doing that in Saint Tropez.

Speaking of billions our Chef counted 95 Super Yachts here last night for New Years. That is some serious money. I have clandestinely taken photos of said yachts on micro breaks. 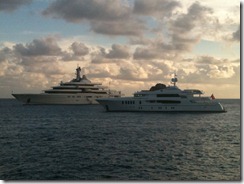 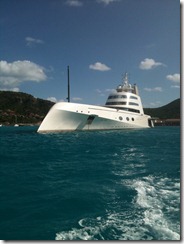 I got to swim in an amazing beach on our second day here. We swam supplies ashore for our charter and in a pinch I make a very convincing Labrador. The beach was full of silicon and impressive sun tans.

It is here I must moan about American television at Christmas time.  It is sickeningly sentimental. Every network has documentaries of terminally ill children literally dying trying to play American sports. All pushing the virtues of sport as a way to cure cancer sponsored by some cancer causing soft drink.

My Christmas day here was very tame. I received no presents. I did eat some turkey and there was a dire shortage of tropical mistletoe. New Years eve was in the same vein. I did get to have a couple of drinks on the bow watching fireworks before we were rained out.

Did I mention the famous people here? Why, I almost saw Ellen and Portia, and the red head from CSI. There were some crappy bands here. Rich people like bad music, Macey Grey and the Black Eyed Pigs(intentional typos)played private parties. I was not invited and I would not have gone if I had been.

I really should not talk about our guests but I suppose it is ok to talk about our guests, guests. Plus this is important fashion trend information on what is hot in Hollywood. We had a guest on board who was a rampant fist pumper and high fiver at the dinner table. Fist pumps and high fives are huge in 2011. Go out of your way to finish every sentence with a fist pump or two and toss in a high five every other second.

Well that's it for now. More of the different after the break.